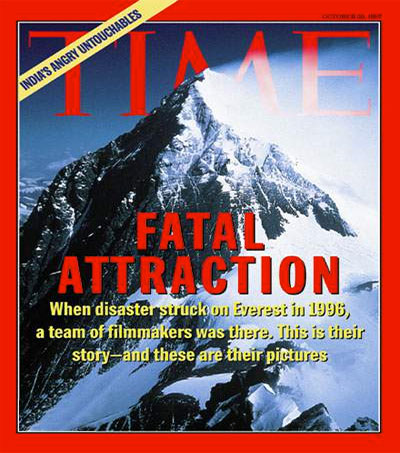 The new movie Everest is all Hollywood, with big movie stars meant for a big IMAX screen. But the story it tells is very real. TIME magazine looks back at the images and account of the 1996 climb, in which a storm resulted in eight deaths, including that of New Zealander Rob Hall.

When the book Everest: Mountain Without Mercy was published in 1997, TIME examined how the disaster came to pass. The story was also an opportunity to look at how a tragedy in one of the world’s most remote spots ended up so well-documented (including in Jon Krakauer’s 1997 book Into Thin Air). As it turned out, two IMAX filmmakers David Breashears and Ed Viesturs were there with cameras.

Even under the best of conditions, scaling a mountain like Everest is an act of near madness. Standing on top of the peak is roughly equivalent to stopping a passenger jet in mid-flight and climbing out onto the wing. The altitude is the same, the temperature is the same, and, most disturbingly, the lung-shredding, brain-addling atmosphere – barely one-third the pressure of sea-level air – is the same.

In the 44 years since New Zealander Edmund Hillary and a Sherpa climber, Tenzing Norgay, first scaled the peak, more than 700 people have followed them to the top; at least 150 others have died in the attempt.

Despite this fearsome history, Everest is big business these days. Tibet and China, recognising a moneymaking natural resource when they see one, have thrown the peak open to tourism. Expeditions charge climbers, often unskilled, up to US$65,000 to be walked to the top. In the spring of 1996, 14 groups from 11 countries swarmed Everest’s lower campsite, digging in 17,600 ft. above sea level in preparation for an attempt on the summit.

TIME delves into their vault for their story “Mountain Without Mercy”.