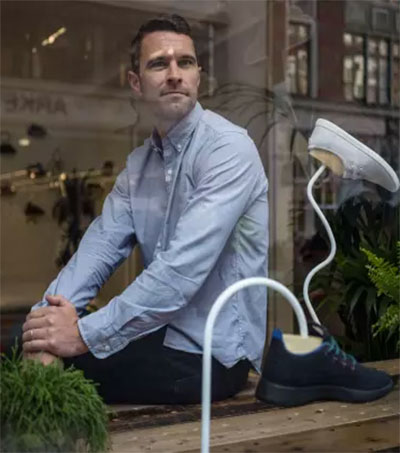 “Coming from New Zealand, the land of 27 million sheep, the idea of wool in footwear seemed like one of those things that should have been done and never had been,” Allbirds co-founder Tim Brown explains to Jonathan Moules of the Financial Times. Brown first pitched an idea for wool sports shoes in 2013, when he was a business masters student at the London School of Economics.

Brown, now 37, spent a term on the MBA programme at Northwestern University’s Kellogg School of Management, as an elective to LSE students. The professor overseeing that entrepreneurship class, former Walmart.com chief executive Carter Cast, did not pick the pitch for ultra-comfortable, sustainably produced shoes as one of the ideas that the students would try to develop.

“Carter called me aside and he said, ‘I don’t think this is a good idea’,” Brown recalls. “‘But for whatever reason, of everyone in this class you seem most committed to try and make this work.’”

Cast suggested selling prototypes so, after returning to London, Brown offered 1000 pairs of shoes on the Kickstarter website. Within four days he had sold them and raised $120,000, which he used to fund product development.

“I remember sitting in a restaurant in London with my phone buzzing constantly as this thing caught fire,” he says.

This was the start of Brown’s second career, as co-founder and co-chief executive of Allbirds, now a hugely popular footwear brand. His idea of making comfortable merino wool shoes that are more environmentally friendly than conventional leather footwear has found fans among the tech elite of San Francisco, where Allbirds is based. There are also stores in New York and London – the latter opened last month.

Before starting his business education, Brown had been a professional footballer for clubs all over the world, spending eight years playing for the New Zealand national team. He was picked as vice-captain for the side in the 2010 World Cup, then broke his shoulder, preventing him from playing in the tournament.

His business education however seems to have paid off. Allbirds’ sales passed 1 million units on the company’s second anniversary last year, helped by a strong online following. Last month it secured $50m to help fund a second hub in London, adding to 140 staff in the US. The company has not revealed revenue figures, but Brown says it has been profitable since 2016. It is backed by several US venture capital firms, including Tiger Global and Maveron.

In the beginning, his father, would tease him by calling him the “wool cobbler” as he struggled to find the right design for his footwear.

Now, though, the opportunity is clear. “There are 20 billion pairs of shoes being made each year on average globally,” Brown says.