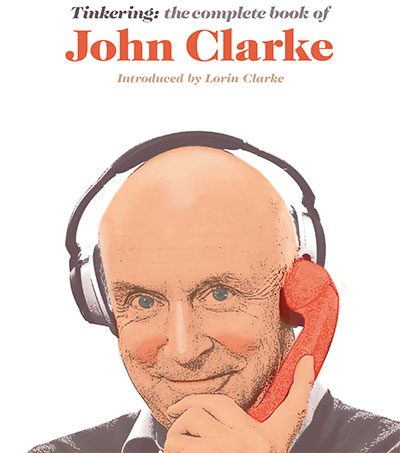 Photographing birds and tinkering with words were two of the late John Clarke’s favourite pastimes. In a Guardian article, they come together in excerpts from a new book showcasing the New Zealander’s body of work, called Tinkering: The Complete Book of John Clarke.

Clarke loved birds. Spending time in the bush, camera at the ready, bird photography was his favourite pastime, his relaxation, his happy place.

As the comedian told Australian BirdLife magazine in 2012, birdwatching gave him perspective on the world and acted as a counterpoint to his working life in comedy.

“I think one of the useful things about an interest in nature and in walking and looking is a loss of the self,” Clarke said. “To completely lose yourself is a great pleasure especially if what you do for a living is put yourself up in some way which is psychically tiring. One of the principal joys of birdwatching is that you are being responsive to the world, you’re just another creature. You are the tool of the world. You are not mastering it, or moulding it to your image or any such piffle, you are reminded of what a pipsqueak you are.”

Included in a new book of his writings is “Letters from the School” in which Clarke whimsically takes a handful of his bird photographs and writes accompanying school letters – stern missives applied not to children, but to the birds.

It’s part of a collection of tinkerings – his name for the writing he did every day until his death in April this year from natural causes when he was out bushwalking and birdwatching with his family in Victoria’s Grampians national park.

As his daughter Lorin writes in the introduction to the book:

“Some people’s dads spend hours tinkering in the shed. Our dad, John Clarke, borrowed the word but required only a desk and ‘gallons of tea’ for the kind of tinkering he did.

“He and I used to email each other drafts of our writing. He sent various things to my mum and my sister, too, and collaborators and friends. Most of those emails are timestamped after 11pm. ‘Had a bit of a tinker since we last spoke. What thinkest?’ the subject line would read. Or, at midnight, I’d send him something saying ‘Need to lose a couple of hundred words from this, what do you reckon?’ Thirty seconds would pass. ‘May I tinker?’ would come the reply.”

Original article by The Guardian, December 2, 2017.