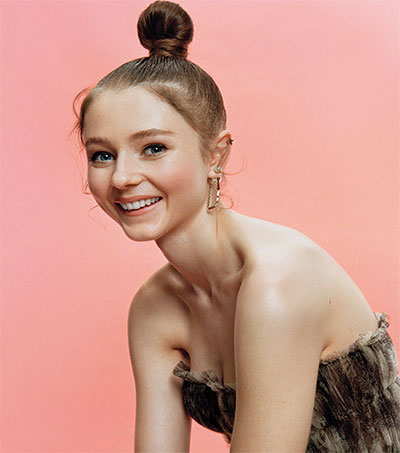 New Zealander Thomasin McKenzie, 19, made a name for herself in indie stunner Leave No Trace, Britt Hennemuth writes for US magazine, Vanity Fair. Now she’s taking winning turns in Taika Waititi’s Jojo Rabbit and Netflix Shakespeare film, The King, and talking about how she does it all.

“You broke out in last year’s Leave No Trace, playing a teen who lives off the grid in the Oregon forest. Did it teach you anything about disconnecting?” Hennemuth asks McKenzie.

“I was banned from using my phone for a couple weeks as preparation for the film, which was eye-opening. I’ve always had a conflict with Instagram – it’s an amazing platform to express yourself, but on the other hand, it’s a trigger for a lot of mental illnesses, constantly comparing yourself to people. I learned it doesn’t deserve all your time and energy,” she says.

“That Debra Granik film still has a rare 100 per cent favourable rating on Rotten Tomatoes and earned you awards buzz and your choice of Hollywood roles. How do you pick your projects now?”

“I gravitate toward projects that have a strong message led by talented people with really specific visions,” McKenzie replies.

“This fall you’ll be seen in The King, a who’s who of young Hollywood with Timothée Chalamet, Robert Pattinson, and Lily-Rose Depp. What was the most memorable part of being on set?”

“On my first day we were doing a big, important crowd scene with Timothée, and there was a problem with one of the props – a mechanical bird wasn’t working – so everyone was freaking out. It was incredibly hot, I’m wearing this massive wig, but it was still super exciting.”

McKenzie was born in Wellington. She attended Samuel Marsden Collegiate.