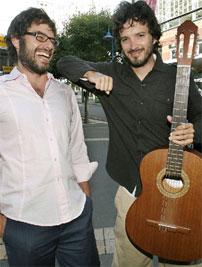 These Kids are Feeling Good

A song written by The Flight of the Conchords to raise money for medical research for children, soared straight to No. 1 on iTunes within 90 minutes of release. Their song, Feel Inside (and Stuff Like That), based on interviews with children from Wellington’s Clyde Quay School, raised more than $1.3 million for the Cure Kids charity. Bret McKenzie and Jemaine Clement interviewed a group of students, aged five and six, about where money comes from and how to make sick children better. Clyde Quay School new entrants’ teacher Kerry Annett said the kids thought the song was pretty funny, but had no idea who the internationally famous duo were. One girl reportedly told the pair exactly how to get into her house, where the spare key was hidden and where their money was kept.