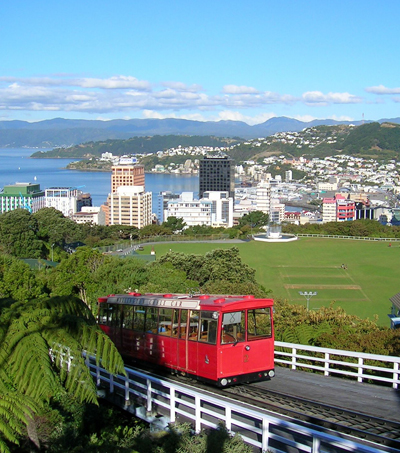 Tempted To Move Out Of The U.S.? Wellington Wants To Help You Escape

After the presidential election, visits from U.S. citizens to the Immigration New Zealand website and New Zealand Now, a website about living, working, studying and investing in the country, soared,” writes Laura Begley Bloom in an article for Forbes. “While some Americans might not have been serious about their intent to leave the country, Wellington, New Zealand — also known as “Silicon Welly — is very serious about recruiting U.S. citizens to move there.”

With their initiative LookSee Wellington the city aims to recruit “100 talented technology candidates from across the globe, with a focus on the United States.” “The program arranges meetings with prospective employers who have roles that match a candidate’s skills, and flights and accommodations are covered.”

“Whether you work in the tech industry or not, Wellington is a great place to live.  Diversity is celebrated, gay marriage is legal and the first female leader was elected more than 20 years ago.” “The city also has more restaurants, cafes and bars per capita than New York City. And New Zealand has been called an “incubation nation,” a place where innovation thrives and where people can make a real change.”

Begley Bloom interviewed “San Francisco native Alanna Irving (formerly Krause), who is cofounder of both Loomio, an online tool for collaborative decision-making, and Enspiral, a social entrepreneurship network,” who has already made the move.

Irving, who originally came to New Zealand on a working holiday visa, said that once she got to Wellington, she knew she wouldn’t want to leave after only one year. In Wellington she “discovered a thriving community of social entrepreneurs”.

“I knew it was a place I could continually learn and grow, personally and professionally. I’ve been here over six years, and that’s still true,” she said.

“They say there’s only two degrees of separation between anyone, so you’ll know someone who knows someone. Kiwis treat everyone pretty much the same, regardless of their background or job title. It feels like a place with a lot of open doors and helping hands,” she said.

When asked how her life in New Zealand differed from her life in the U.S. Irving said: “First of all, I walk everywhere! Wellington is so compact that you can easily get anywhere in the central city on foot. It’s small enough that I pass friends on the street all the time, but large enough to have tons of restaurants, theaters, museums, conferences and cultural events.”

“Incredible nature is right there at our fingertips, so I feel a lot more connected to the environment. I feel like the local community really knows me and cares about me, and sees investing in me as investing in our collective ecosystem. That’s pretty amazing for someone who’s a relative newcomer. I’ve definitely found building strong networks and relationships easier here.”

To read the full article and interview please click here.