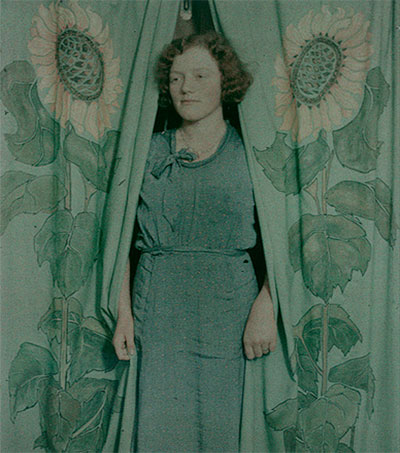 “Te Papa has a small but representative collection of photographs comprised of the work of just three photographers: Robert Walrond, James Chapman-Taylor and A. H. Eaton,” Mitchell explains.

“The collection is notable for the similarity of the subject matter with photographers from other countries who also used the autochrome format in so far as images of women, floral and still life compositions, and scenic landscapes dominate.

“That autochromes were mounted on glass seems to have meant their use remained mainly in the hands of amateur photographers and those seeking to make colour images for use in scientific lectures. The autochrome’s ability to represent scenes in colour made it an appealing process to those wishing to pursue it for artistic and scientific uses.

“In New Zealand there are few recorded uses of the autochrome and it seems to have remained largely within the realm of amateur photographers and the camera club movement.

“The sad reality that there are so few examples held within public collections in New Zealand is perhaps a combination of several factors, among them the fragility of the glass plates and a reluctance to address photography from the Pictorialist era as a serious art form. Hopefully, as understanding of the process increases, more plates will be identified, with many potentially lurking hidden within collections of glass lantern slides.”