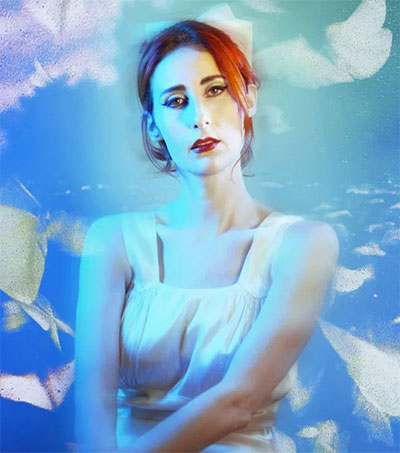 In the Los Angeles apartment of New Zealander Tamaryn – one of the most underrated artists in the world of gothic-synthpop – a TV screen is always on a loop featuring classic ‘80s music icons. The day before a recent Los Angeles Times interview it was Bryan Ferry day. Today it’s Annie Lennox.

Since 2010, Tamaryn (real name: Tamaryn Brown) has released three LPs that share in her love of the ‘80s and ‘90s underground: everything from shoegaze to industrial. Yet her music isn’t overshadowed by nostalgia, nor does the artist define music by decades.

“It’s a language that’s always there to work with. I don’t care about doing something that hasn’t been done before. It’s the craft that fascinates me,” Tamaryn says.

Dreaming the Dark, the incumbent to her 2015 album Cranekiss is her most pop-friendly. “I had a joke I was gonna call it: ‘The Best of Tamaryn,’” she says.

On the record there are flashes of Speak & Spell-era Depeche Mode, Kate Bush histrionics, even ‘80s band Ministry. But rather than drown out her voice as she’s done before, this time her truth is brought to the fore. “I always had my hair in my face, I’ve always tried to create something bigger than me to transcend the mundane,” she says. “This time I’m trying to step into my power.”

When Tamaryn relocated from New York to LA several years ago she didn’t know she’d find such peace in LA’s music community. Excitingly, she’s been writing with Sky Ferreira this past year for songs on her forthcoming second album.

Such mentors can be few and far between in the music industry, and Tamaryn has been at it long enough to know what’s worth protecting when it comes to creativity.