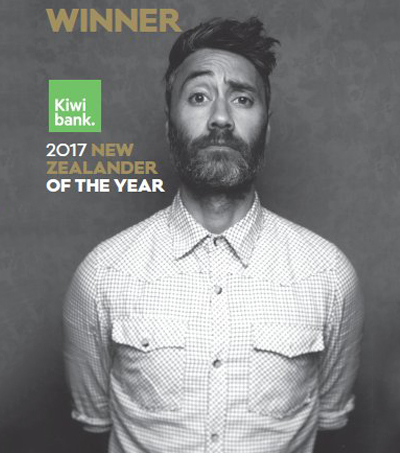 “Hunt for the Wilderpeople director Taika Waititi has been named as the 2017 New Zealander of the Year,” as reported on TV3.ie.

“I just found out the news. Wow, amazing. Thank you so much. I couldn’t be more proud. It’s a privilege to receive this award and I accept it humbly and gratefully. I’m also a New Zealander, so I’m slightly embarrassed. But I’m getting over it,” said Waititi in a video message he sent from Los Angeles, where he now lives.

“This is actually a cry for help, this video. I need you guys to come and get me, they won’t let me out. You know they wanted me to say that they’re treating me well. The meals are too big and everything’s too loud here, the accents, it’s horrible,” he joked.

“New Zealand of the Year Awards Chief Judge, Cameron Bennett, said Waititi is an exciting and inspiring example of who and what we are as Kiwis.”

“Creative, courageous, audacious, subversive and downright funny, he’s at the forefront of New Zealand filmmaking and the arts,” he said, as reported on TVNZ.

According to the TV3.ie article Waititi may not be able to return to his homeland for a while yet, as he has “taken the reins on Marvel’s forthcoming superhero movie Thor: Ragnarok.”