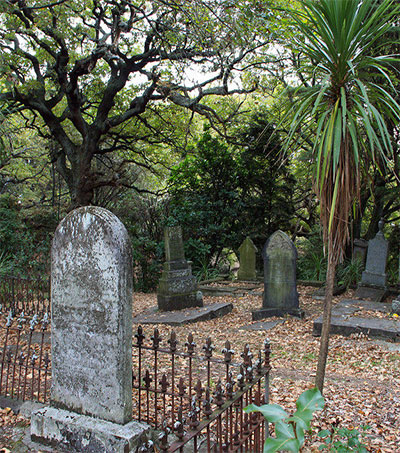 Atlas Obscura writes: “One of Auckland’s oldest cemeteries was partially demolished during the construction of a major highway in the 1960s.

“The first official urban cemetery in Auckland began interments in 1842. The city itself was only established by European settlers in 1840, and the Symonds Street Cemetery contains the graves of many of its early founders, such as William Hobson, the first governor of New Zealand and co-author of the Treaty of Waitangi.

“Burials continued at the cemetery until the early 20th century. Then in the 1960s, when the Auckland Southern Motorway was being developed, the highway proposed passage through what was then the Anglican and Catholic sections of the graveyard. It’s reported that during the relocation of some 4100 bodies from these sections, some of the gravestones were actually used as highway foundation filler. The bodies were then dumped into a mass grave, and a memorial with names serves as the sole memory of those otherwise forgotten souls.

“This wasn’t the first time the cemetery’s borders were penetrated by the advancing city. In 1910, the Grafton Bridge was built over part of the burial ground, but in such a way that only eight graves had to be moved.

“Today, the cemetery is in a state of disrepair, and has frequently been the victim of vandalism. But for those who wish to escape the bustle of the city to sneak a peek into Auckland’s past, it remains an oasis of peace and wonder.”