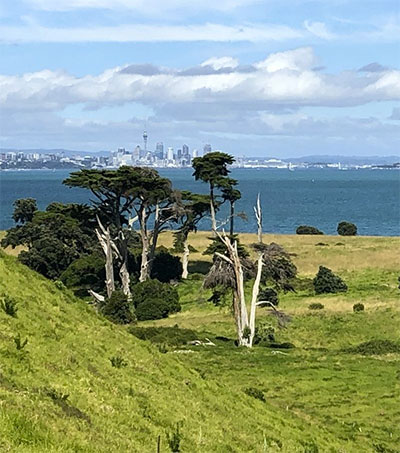 “In the middle of busy, urban Auckland harbour, there’s a little spot of green,” travel site Atlas Obscura writes. “It’s a peaceful place, one without tourist boats and very few structures at all. You may notice it while standing on the city’s shore, or while cruising along on a ferry to one of the more developed islands.

“This oasis of serenity is Browns Island, or Motukorea. Though it looks quiet, it’s actually a remnant of the land’s volatile past, as it’s one of the Auckland volcanic field’s most intact volcanoes.

“The island once bustled with human activity, too. It’s speckled with archaeological ruins from Māori pā. For centuries, Māori gardened on the little island and used it as a base while fishing.

“Regular tour boats don’t stop at Browns Island, but it’s accessible by private sailboat, kayak, or seaplane. When you’re on the island, you’ll notice it seems like a steep, grass-covered hill plopped within the harbour. You can see down into the main caldera from the top of the hill, as well as three volcanic cones on the curving slopes.”