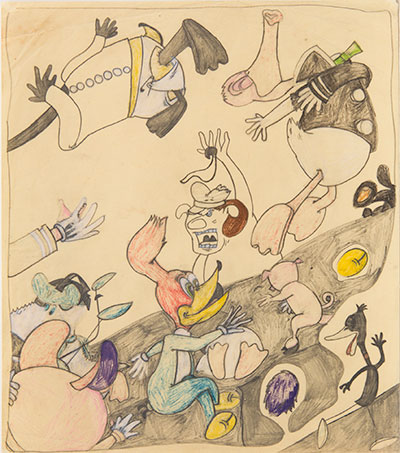 Since the early 1960s, New Zealand artist Susan Te Kahurangi King – who makes her gallery debut in Chelsea, New York – “has been reworking Looney Tunes characters like a rogue animator, abstracting, distorting and disassembling them in surreal and psychedelic landscapes.”

A small installation of King’s drawings was the undisputed hit of this year’s Outsider Art Fair, according to the New York Times.

“In one early graphite drawing, Sylvester the Cat has met with a fate even Tweety Bird could not have imagined: He’s involved in a nasty-looking pileup of cartoon body parts. Later comes a Popeye head sprouting from the beak of the Road Runner, a composite figure surrounded by ducks who are floating skyward in the manner of Tiepolo figures.

“King also has a way of animating negative space; clearly, she does not suffer from horror vacui. In her colored-pencil drawings from the late 1970s, waves of tiny, minnow-like figures press in from the bottom right corner of the page, but leave half of it blank.

“As the gallery’s news release tells us, King, 63, stopped speaking at the age of 4 (for reasons that have never been attributed to a specific disability). This bit of knowledge encourages us to see her extraordinary fluency with graphite and colored pencil as a kind of substitute for speech. But we don’t necessarily need to know that to appreciate that her drawings, which invoke, among other things, the sonic mayhem of Saturday morning cartoons, are commandingly vociferous.”

King’s work is exhibited at the Andrew Edlin Gallery until 20 December.