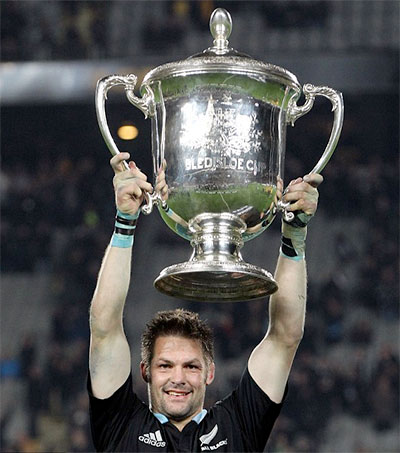 New Zealand retain the Bledisloe Cup with an astonishingly good performance, smashing Australia 51-20 in Auckland, scoring six tries and stating categorically that the last game’s mediocre showing in a 12-12 draw was merely a blip, the Telegraph’s Steve James reported.

“It was a record score against Australia and it was stunning stuff, especially after the All Blacks had lost skipper Richie McCaw to the sin bin in the first-half. He recovered rather well to score two second-half tries to add to some other quite magnificent individual efforts from fly-half Aaron Cruden (with 19 points), outside centre Conrad Smith, No 8 Kieran Read, scrum-half Aaron Smith and, in the half that he was on the field, inside centre Ryan Crotty. But no-one was better than lock Brodie Retallick, who had one of the great matches as a lock.

“But it said so much about New Zealand’s mindset and resilience that they upped their game in McCaw’s absence. They were all over Australia in that 10-minute period. In the end they only won it 3-0, but it was a huge statement.

“Australia simply had to score first in the second-half to make it a contest. They didn’t. Read crossed for New Zealand after a stunning counter-attack, and then soon afterwards McCaw pounced after a driving line out for the bonus point.

“He added a second so that, with Cruden’s conversion, it was 44-6. Australia did rally with two brave tries from [Israel] Folau and captain Michael Hooper, but could not score again, even when All Black replacement prop Ben Franks was sin-binned. Indeed it was New Zealand who had the last word with a sixth try for replacement Steven Luatua, ensuring emphatically that those scores were no consolation for Australia.

“The game had been lost long before. And lost very badly.”