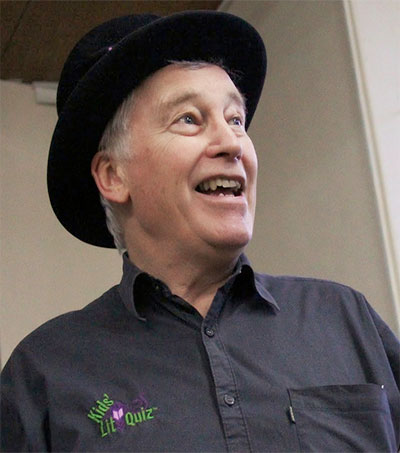 In a quaint old theatre in Falmouth, Cornwall, a tall gentleman in a top hat stands facing the stage, like a conductor. The man is not just the ringmaster and question-setter for the Kids’ Lit Quiz but its founder and driving force. His name is Wayne Mills, and he is four days into retirement from his day job as a senior lecturer at the University of Auckland.

His subject was education itself, so he saw many schools. “I would go to assemblies and the prizes would be dished out for sport, sometimes maths and English and so on,” he tells me. “But never ever did I see anyone being recognised for being good at reading. That was the catalyst.”

It all began in 1991, when Mills, then working at the University of Waikato, held the first Kids’ Lit Quiz in Hamilton, with 14 schools taking part. It took him 15 years to reach Britain, which hosted the first world final in Oxford in 2007. How many schools take part now? “Thousands,” he says. “We’re in 11 countries.”

Mills writes every question himself, charging only expenses and a fee for the rights. For his 23 years’ service to reading, he has been made a Member of the New Zealand Order of Merit. Even more usefully, the quiz has a celebrity alumna: in the New Zealand team of 2009, which finished second, was Ella Yelich-O’Connor, better known as Lorde.

Now that he is retired, Mills wants to put the quiz on a more businesslike footing. At the 2015 world final in Connecticut, the first to be held in America, he will launch the Kids’ Lit Quiz app for Apple and Android (99 cents). “It’ll have 100 questions at level one, 100 at level two, and once you get through, the world-final questions. And no multiple choice. If you don’t know the answer, you have to go and read the book.”