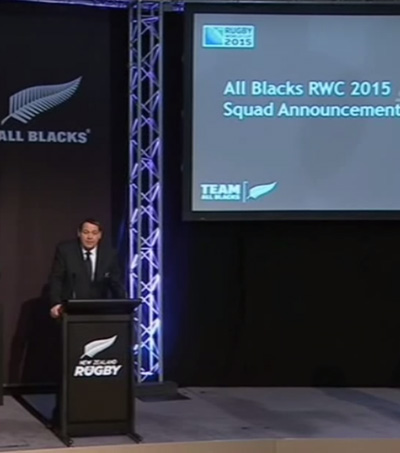 There were few surprises in the All Blacks squad announcement “with coach Steve Hansen naming 17 forwards and 14 backs with the emphasis on the backs being their versatility to cover numerous positions.”

“Richie McCaw will captain the side in his fourth World Cup as he seeks to become the first player to lift the Webb Ellis trophy for a second time.”

“We (are) going to defend the World Cup, it’s not ours. We have to give it back… and we have to go out and earn it with high class, world class performances,” said Steve Hansen.

“It will be tough and I think it will be the hardest World Cup ever”.

Nehe Milner-Skudder and Waisake Naholo were the only surprises in the squad announcement according to The Guardian article.

Waisake Naholo had initially been ruled out of contention when he suffered a broken leg on his Test debut against Argentina last month. The player sought alternative treatment in Fiji to be able to join the World Cup squad.

“We have picked a group of men with the experience, X-factor and mental strength to do the job. We have the confidence in them and we hope the 4.5 million people will get behind them,” said Hansen.

The announcement had created enormous speculation in the rugby-mad country. A lot of debate had been around the composition of the back three as it seemed that Israel Dagg and Cory Jane were competing for the last two spots before Naholo’s recovery.

Liam Messam and Victor Vito also had been thought to be competing for one place in the mix.

Sam Whitelock, Brodie Retallick and Luke Romano are the only specialist locks of the World Cup squad to accommodate the six loose forwards included.