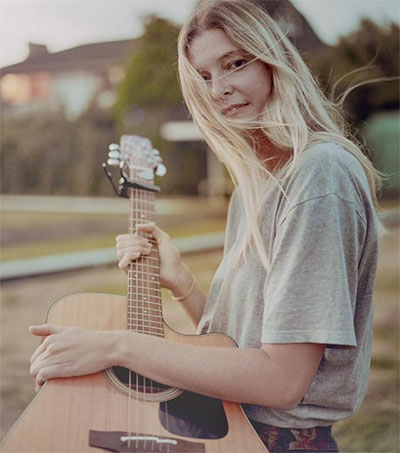 New Zealand alt-country guitarist and singer-songwriter Jamie McDell, 26, has just released her introspective Botox EP. Music magazine Billboard reports on the set and how it all came about.

McDell enchants with airy vocals and confessional lyrics on the title track and its intriguing follow-up “Worst Crime”, Annie Reuter writes for Billboard. All the while, her storytelling is at the forefront of each song.

While “Botox” was quick to write for McDell, who is originally from Auckland, she says the idea draws from her insecurities over the years. Whether it was channelling her youth or being away from her native of New Zealand following a move to Toronto, she says she was “at a boiling point” and “Botox” is what spilled out.

“I’d just moved to Toronto, I’d come from a summer of surfing on the coast of New Zealand every single day, the kind of activity I find so therapeutic,” she tells Billboard of the EP’s title track. “Then I found myself sitting on the floor in my apartment thousands of miles away and it all came to the surface. From boys at school saying I was too tall or explaining that if I got breast implants I would be ‘perfect’, to the loving relationship I’m in now with a man whose values go so far beyond physical appearance.”

Following the release of previous album Extraordinary Girl, McDell says she promised herself that she’d say what she meant on this next phase of her musical journey with producer Nash Chambers.

“I’m feeling a longing for truth and authenticity in a genre that for the last decade has just felt a little polite. I am so excited to see other female artists opening doors and breaking down barriers not only in regard to career opportunities but encouraging a wider range of perspectives in our lyrical content.”

“I’m still a student, still learning how to speak my truth and celebrate my own perspective and I hope people can hear that in my music,” she adds.