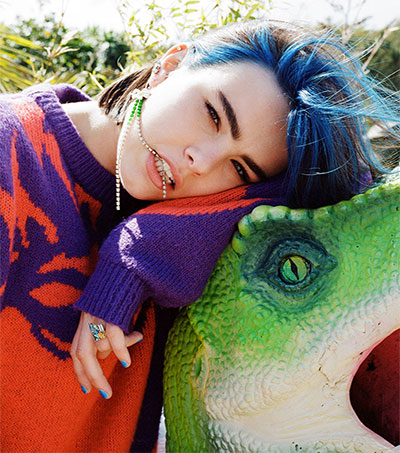 Tūī Winner Benee Has a Vision

Aucklander Benee, otherwise known as Stella Bennett, who claimed four Tūīs at this year’s Vodafone Music Awards, talked to Billboard’s Gab Ginsberg in the United States recently about her latest EP, Stella & Steve, “a tight handful of R&B and electronic-tinged pop tracks that showcase where she is here and now”.

Quirky lyrical twists – coupled with rich vocals and smooth production – are a trademark of Benee’s style (which has quickly earned her chart success in New Zealand and Australia, and tens of millions of Spotify streams). That style then translates to her songs, artwork, and even the clothing she wears, Ginsberg writes. All of this is what the singer-songwriter calls “Benee vision”.

“I’m still experimenting, still moulding Benee,” she explains. “It’s like, I have this blank canvas and I’m just starting to add some paint and stuff, but it’s going to kind of create a big thing.”

Stella & Steve is her second EP of 2019, serving as a more chill companion to the bubbly Fire On Marzz EP. “It’s a mix of old and new songs, and sad songs and happy, fun songs,” she summarises.

Benee’s also been honing her live show. At our interview, she’s fresh from a headlining set at New York City’s Rough Trade, and will have some time in New Zealand before performing sold out shows in Australia, and then heading back out with Conan Gray. Aside from “bad dancing”, she says fans can expect plenty of “odd storytelling” at her concerts. “Honestly, I’m the worst storyteller ever. Like, I just take so long. I’m dyslexic, and I was reading that storytelling is actually [harder] with dyslexia,” she says, then jokes: “So I’m going to use that as an excuse.”