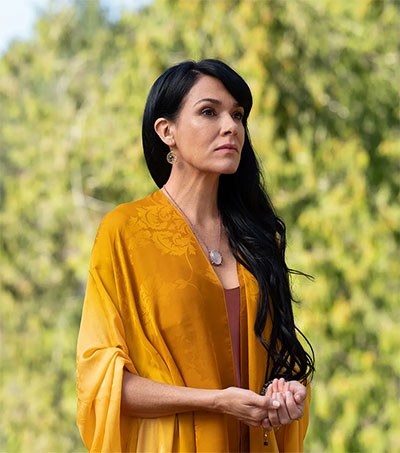 In a Vanity Fair exclusive first look at adult Lottie Matthews (one of the Yellowjackets plane crash survivors), New Zealand-born actor Simone Kessell, 47, discusses where she’s been and asks, “How long can you wear that mask? How long can you deny those antlers?”

It was revealed in the first season’s final moments that Lottie, is still alive. It was gasp-worthy to learn that not only had another Yellowjacket made it out (and skipped the class reunion, how dare), but this one in particular had: Lottie was revealed late in the season to be the Antler Queen, having visions and leading the team in invented rituals, including hunting Travis, one of their dead coach’s sons.

Now, 25 years after the crash of Flight 2525 in the show’s timeline, Lottie is back. Kessell was announced as adult Lottie in August, but has kept mum on what Lottie has been up to – until now.

“She’s come into her life,” Kessell tells Vanity Fair in a preview of the show’s second season.

New Zealand-born Melanie Lynskey reprises her role as Shauna in the new season.