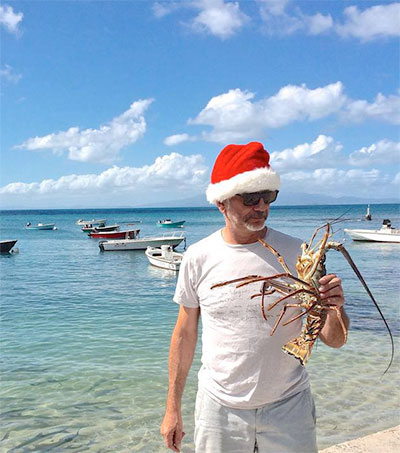 New Zealander Simon Baeyertz, a “music-business refugee” who once worked with Nine Inch Nails and Marilyn Manson, is now the owner of and the driving force behind Caribbean hotel El Blok. Along with his chef José Enrique, Baeyertz is helping to reclaim Puerto Rico’s “food paradise.”

Enrique, 37, is a leader in a movement of loosely affiliated Puerto Rican cooks, farmers and activists who have arrived at the same realisation over the last few years: There’s a juicy gastronomic paradise at their fingertips, and all they have to do is reach out and grab it.

“You will fly over land that’s green, verdant, beautiful – and nobody’s growing anything,” Baeyertz said. “And the younger generation has started to say, ‘Wait, that’s crazy!’ ”

Enrique, whom Food & Wine magazine picked as one of its best new chefs in 2013, is seen as leading that charge.

“It’s incredibly fresh, his food, which is what I love about it,” said Matt Jennings, a New England chef who has visited Enrique’s spots several times. “[Incredibly fresh food] embodies what José’s restaurants are about.”

Baeyertz had a similar reaction when he stepped into Puerto Rico’s Santurce restaurant and realised that he wanted to lure Enrique into developing a menu for his hotel in Vieques, just off the eastern tip of Puerto Rico. “Honestly, I went to the restaurant at lunchtime, and it was like, ‘This is it,’ ” he recalled. “The simplicity thing – I guess that’s it, because that’s kind of what I was obsessed with.”

Travel + Leisure magazine describe Baeyertz’ El Blok as “like a tropical Brutalist alien that crash-landed, quite happily, amid the brightly painted houses of Esperanza, a ramshackle beach village on the island’s southern shore.”

“Little about the place relates to the design vernacular of the islands, and your first reaction might be a double-take, but the hotel’s charm and cool factor – reflections of Baeyertz’s laid-back attitude (what can possibly faze a guy who used to work with Manson?) – will win you over. El Blok is easily the most stylish new hotel in the Caribbean.”