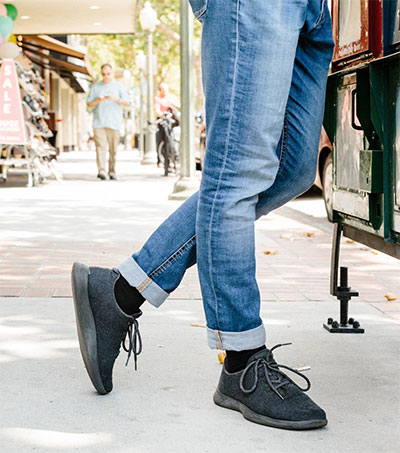 In true Silicon Valley fashion, Allbirds is a start-up. Is it venture funded? Of course it is. The company has raised US$9.95 million over the last year to spread its vision. But this being start-up land, a shoe is never just a shoe.

“We’re about the distillation of solutions, the refinement and crafting of forms in a maniacal way,” Brown told the New York Times.

At a gathering last month hosted by the venture capital firm August Capital on Sand Hill Road in Menlo Park, California, about 1000 entrepreneurs and investors mingled on a concrete patio over margaritas and deviled eggs to celebrate summer. Guests wore other shoes – New Balance, Top-Siders, Tevas and a rare dress shoe were spotted — but the furry-looking Allbird was by far the most common.

Serik Kaldykulov, the managing partner for Elefund, which finances early-stage start-ups, wore a pair as he waited to get into the party.

“Everyone’s wearing them. Sometimes it is awkward, especially if we’re wearing the same colour – but then it’s an icebreaker,” said Kaldykulov, who owns four pairs in different colours.

Allbirds are made of a very fine merino wool, each strand 17.5 microns wide. “Which is 20 per cent of the width of the average human hair,” Zwillinger said.

The shoe’s name comes from what explorers supposedly first said of New Zealand: “It’s all birds.” Also, Zwillinger is an avid birder.

Brown and Zwillinger have 50 employees in their San Francisco headquarters, 350 contractors in a factory in South Korea and 40 at a warehouse in Nashville.

The co-founders are hoping to appeal to the same consumer who buys basic clothes from Everlane, also based in San Francisco, and eyewear from Warby Parker. (Two Warby Parker founders are Allbirds investors.) Shoes are an $80 billion industry in the United States, where the average American buys eight pairs a year, according to a Euromonitor International Passport report.

“If you were going to design one sneaker and only one, what would it look like? We focused on this idea of a singular solution,” Brown said. “The right amount of nothing.”