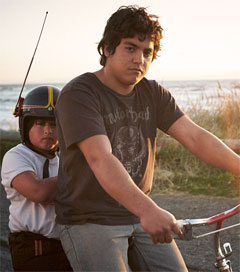 Feature debut from New Zealand filmmakers Mark Albiston and Louis Sutherland, Shopping, which has premiered at the Sundance Film Festival, deals with the troubled home life of two half-Samoan brothers against a backdrop of racial tension. David Rooney of the Hollywood Reporter writes in a review of the film: “Many of the elements are familiar, but the setting in a lonely village on the Kapiti Coast, is distinctive. This is a film that places a premium on unvarnished authenticity, even at some minor cost to its accessibility. As a coming-of-age drama laced with quiet humour, Shopping has its charms, many of them stemming from the unaffected performances of [Kevin] Paulo and [Julian] Dennison (pictured).”