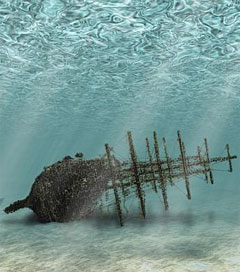 Shipwreck Find Could Alter Our History

Timbers from a shipwreck found in Kaipara Harbour have been dated to some 70 years before Captain Cook, identified as having originated in Southeast Asia as early as 1700. Captain Cook’s Endeavour encountered New Zealand in 1769.

The University of Auckland’s Dr Jonathan Palmer, who used tree-ring techniques to date the ship’s timbers, is calling for a full excavation of the wreck now buried under some 10m of sand.

Palmer told TVNZ his first reaction at seeing the dating results was “Good God, this could be really important It really needs excavation. It needs to be an eminent archaeologist.”

The ship was discovered in 1982 by a local mussel fisherman. The wood he salvaged was later identified as the tropical hardwood Lagerstroemia.

It has only recently been further analysed.

Palmer cites Captain Cook’s log books as reporting Maori traditions of earlier shipwrecks as further evidence such a dig would be worthwhile.