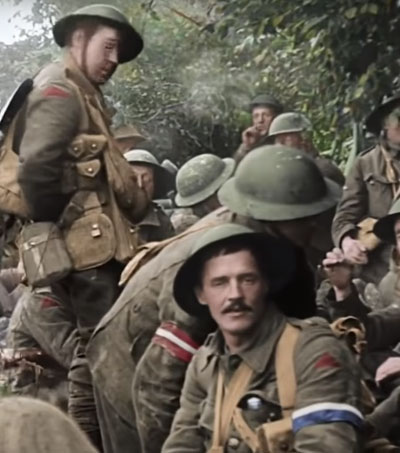 They Shall Not Grow Old – “Utterly Breathtaking”

“Peter Jackson and team’s painstaking restoration of first world war footage is a cinematic triumph that all but brings young British soldiers back to life,” writes film critic Mark Kermode in a review published in The Guardian.

“Along with Avatar director James Cameron, New Zealand film-maker Peter Jackson has been at the forefront of the digital revolution, with his twin Tolkien trilogies (The Lord of the Rings and The Hobbit) pushing the boundaries of computer-generated entertainment,” writes Kermode.

“Yet with his latest project, a revivification of the Imperial War Museum’s archive of first world war footage, Jackson has done something quite remarkable: using 21st-century technology to put the humanity back into old movie stock. The result is utterly breathtaking.”

“Commissioned for the Armistice centenary by IWM and 14-18 NOW in association with the BBC, They Shall Not Grow Old is not a document of the world at war. Rather, it is an arresting snapshot of the lives of British soldiers who went to fight in Europe, many of them having lied about their tender ages to enlist,” writes Kermode.

“There are no historians, narrators or political commentators to guide us; the voices we hear are those of veterans, many gathered by the BBC during the making of its 1964 documentary series The Great War.”

“I’ve often argued that cinema is a time machine, but rarely has that seemed so true,” writes Kermode.

“While the unspeakable horrors of conflict are everywhere in evidence, Jackson’s film still finds unexpected life and laughter in the company of those who walked in the shadow of death.”

Tags: Guardian (The)  Peter Jackson  They Shall Not Grow Old