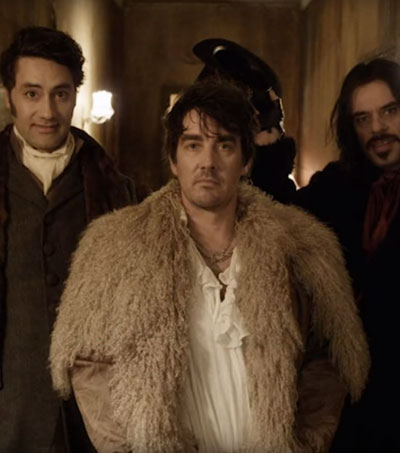 What We Do In the Shadows Premieres at NY Comic Con

The first episode of the upcoming What We Do in the Shadows TV show, featuring co-creators Taika Waititi and Jemaine Clement, has been screened at New York Comic Con.” Christian Holub reports in an article for Entertainment Weekly.

“What We Do in the Shadows first started as a stand-up bit where Clement would play a vampire comedian,” then grew into “a 2005 short film” followed by the “beloved 2014 feature What We Do in the Shadows.” “Now the concept has grown into a TV show of the same name for FX, but the series is set in New York City rather than Wellington,” reports the article.

“The plot of the first episode centers on the arrival of an ancient vampire known as the Baron, who is traveling from the Old World to New York City for the first time to see how the plan to conquer America is going”.

“Meanwhile, Nadja is stalking a human man she believes to be a reincarnation of a medieval knight she loved back in the day. But the real focal point is Guillermo, who wants nothing so much as to become a vampire himself,” writes Holub.

Tags: Entertainment Weekly  Jemaine Clement  Taika Waititi  What We Do in the Shadows