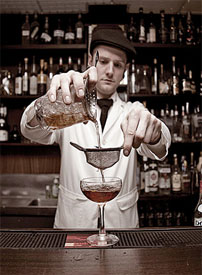 “By the standards of global hipness, New Zealand – where local food is a way of life and you’re as likely to see a beard on a farmer as on a barista – has been cool for years,” Jason Rowan writes in The New York Times. “Which may be why the windy capital city of Wellington is getting buzz as the Portland of the Pacific. Fueled by an abundance of fishing and agriculture, the restaurant scene is brimming with experimentation. The menu at Boulcott Street Bistro includes dishes like Pukekohe chicken with fennel and cabanossi. Cocktails have gotten serious, too: Matterhorn makes its own tinctures and liquors infused with flavours of geranium and cigar. [At] the ’50s-style lounge Motel drinks are inspired by everything from 18th-century highwaymen to Modesty Blaise. And of course there’s coffee. Eight boutique roasters serve Wellington’s population of 198,000. At Customs Brew Bar, where there are no to-go cups, you’re expected to pause and savour the brew on premises.”