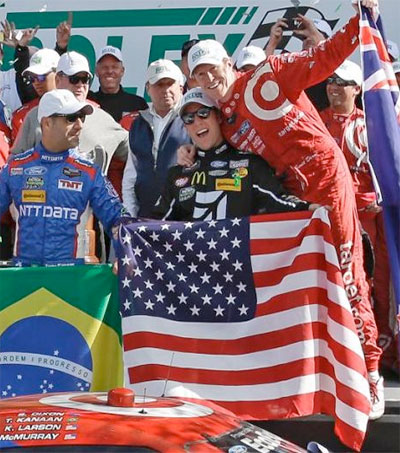 Dixon relieved Larson with 3 hours, 32 minutes remaining in the twice-round-the-clock endurance race, and set out to conserve fuel, make no mistakes and follow the Ganassi strategy down to the checkered flag.

Dixon, the “Iceman” delivered, and made it look easy, too.

He totalled more than seven hours behind the wheel of the Target/Ford EcoBoost Riley Prototype and carried the heaviest load on the team.

“We had such a good group of guys driving, an awesome team,” McMurray said. “It’s about Scott Dixon to me. It’s really hard to appreciate the talent that guys have from other series until you race with them, and it’s crazy the pace that Scott is able to have in the car. It’s so much fun to sit up there and watch it.”

It was the second win for Dixon, who was part of the 2006 victory with Casey Mears and Dan Wheldon.

After picking up his second watch, the New Zealander downplayed his role.

“The car was very consistent, and I think we had good speed, but everybody pulled their weight,” he said. “Everybody did what they needed to do, and that’s what gets you through this 24 hours. Everybody kept the car in one piece.”

Dixon was named New Zealand’s Sportsman Of The Year in 2008 and 2013. In July 2013, Autosport magazine named Dixon one of the 50 greatest drivers to have never raced in Formula One.