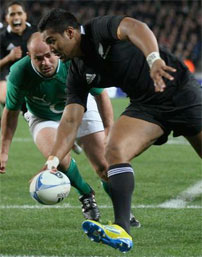 Savea Does Us Proud

The All Blacks trounced Ireland 42-10 at Eden Park in the first test since winning last year’s World Cup, with 21-year-old winger Julian Savea scoring three tries in his debut for New Zealand. Savea touched down twice in the first half and once in the second, becoming the first All Black to score a hattrick against Ireland, as New Zealand ushered in a new era with head coach Steve Hansen. “It was very pleasing with how we started,” captain Richie McCaw said. “Turnover ball is the best ball to get and we forced a couple of them and scored one try from counter-attacks.” Ireland ended the game bewildered, with no idea of how to match the All Black’s pace and skill level. The second test will be played in Christchurch on 16 June.