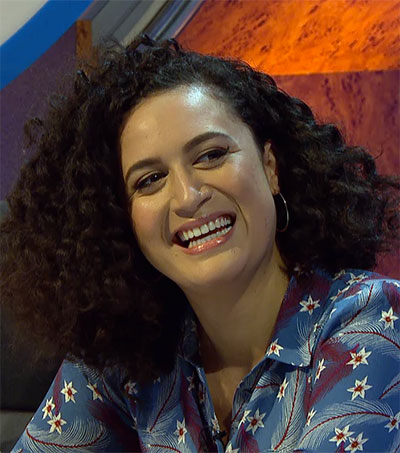 It is almost a year since Matafeo won the Edinburgh Comedy Award, adding her name to an illustrious honours board that includes Steve Coogan, Frank Skinner and The League of Gentlemen, Jones reports. The Aucklander was only the fifth woman and the first woman of colour to win the prize since it began in 1981.

What else has changed since last August? Her job title, mainly, Jones explains. Matafeo has been doing comedy since she was 15 years old. “But I’ve hardly dared call myself a comedian – after 12 years. After I won the award, I thought I probably should start saying with confidence that I do comedy. That I’m a comedian.”

The comedian is now reprising her winning show, Horndog, for one last hurrah – with two nights recently performed in London and five nights in August at the Edinburgh Fringe. Horndog is a high-energy joy which starts with Matafeo bounding around in a tennis skirt, challenging her audience to ping-pong, and doesn’t let up for the next hour, zipping from jokes about K-pop, crocheting and porn to quickfire observations about teenage angst and twenty-something feminist anxiety, via break-up skits and Powerpoint presentations about her adolescent crush on Alex Kapranos, the lead singer of Franz Ferdinand, who has since become a friend (“I went to his house for dinner. It was insane.”)

She talks a lot about her confidence – or lack of it. “I’m a Pisces. Don’t put a Pisces on stage. They feel too much, it’s dangerous, they’ll reveal too much.” Recently she went back to Auckland Girls’ Grammar School where she was head girl to give a talk. “It was funny going back as an adult woman and still feeling like an absolute nerd,” she says. “I felt 13 years old again. These girls were much more confident than me.”

She is now writing a BBC sitcom, in which she will also star. She is not one of those comedians who has to gig every night to feel alive, preferring only to perform material when it’s polished and ready. “Some comics can take an idea and riff with it or just see where it goes. I’m too cripplingly anxious to do that. If I don’t have a beginning, a middle and an end, I panic. And I’m like, ‘Wow, I’m a piece of shit, I should just give up comedy forever.’”