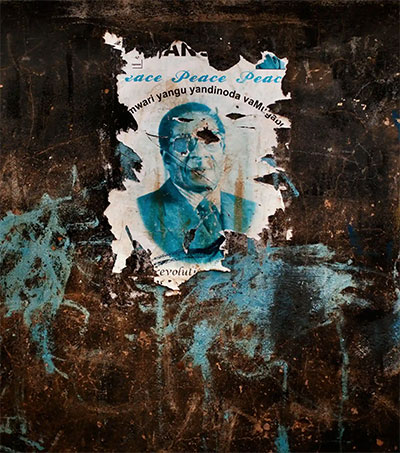 New Zealand-born Robin Hammond is one of ten photojournalists whose work is currently on show at Fondation Carmignac’s newly opened private museum on Porquerolles island, France. Fondation Carmignac is exhibiting each photographer’s work in a retrospective titled 10 Years of Reportage, on show until 1 November 2020. Tom Seymour writes about the show for The Guardian.

Award-winning Hammond, 45, calls Robert Mugabe’s Zimbabwe “a garden of Eden that became a hell to many of its inhabitants”, Seymour writes. In the processing of taking portraits of Zimbabwe’s pro-democracy activists, Hammond was imprisoned twice. “They wanted to show me the terrible living conditions they have to endure,” he says. “But some were afraid for me, and warned me of the danger.”

His portraits include the face of the activist Masvingo, staring out from a pool of darkness. Hammond hides his body, severely burnt after soldiers threw a can of lit petrol into a campaign office for Zimbabwe’s Movement for Democratic Change.