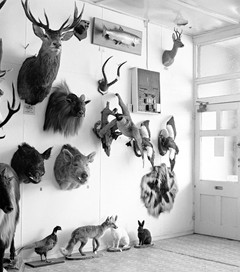 “After spending several years abroad, photographer Harry Culy returned to his homeland of New Zealand and took a series of road trips exploring the world he had known while discovering it anew through the journey,” Jenna Garret writes for photography site Dripbook.

“‘By the Wayside’ is Culy’s attempt to portray a country more complex than the colourful postcard imagery for which it is so well known. The series of black and white photos are both quiet and wistful, each curious portrait and eclectic landscape possessing a thoughtful melancholy. ‘By the Wayside’ acts as a gothic diary of one photographer’s perception and unease of his homeland, full of a past and present reconsidered.”

“By the Wayside” is on at Wellington’s Photospace Gallery through 17 February.

Culy is a graduate of Massey University.