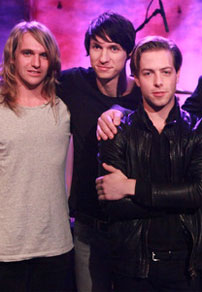 The biggest thing to happen to New Zealand since Peter Jackson’s makeover is Auckland band The Naked and Famous according to Aidin Vaziri writing for the San Francisco Chronicle. “[The Naked and Famous are] a ridiculously handsome band that in the past year went from supporting small indie acts to playing major festivals around the world (Lollapalooza, Glastonbury, Treasure Island).” The Chronicle spoke to band member Aaron Short (centre). “‘At the beginning, our manager told us, ‘It’s going to be the busiest year of our life.’ Short said. ‘It’s living up to our expectations in that area.’” Vaziri asks: “You were still working a day job at this point last year. When did you quit? ‘It was when we signed our deal with Universal. We realized things were going to get a lot bigger. So we prepared to live in hotel rooms and buses.’”