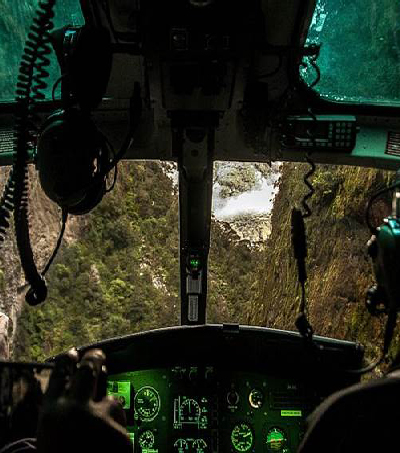 Sir Richard is is probably New Zealand’s most legendary helicopter pilot – 30,000 flying hours and an “embarrassingly long list” of bravery awards. He was knighted in the Queen’s Birthday Honours this year.

Tourism company Ahipara took National Geographic Russia on an 11-day trip between May and June this year.

Richard Hayes took the sightseers up in his favourite machine, a B3 used by Southern Lakes Helicopters in Antarctica.

Jean-Michel Jefferson  writes “He then took us to his old ship berthed in the most remote, most beautiful, most mysterious and most historic Sound of them all – Dusky Sound.

“In the photo above we had just landed in Campbell’s Kingdom – a beautiful hanging valley west of Manapouri, and Richard was then taking us back out, flying low through the narrow gap.

Being National Geographic, we were focused on New Zealand wilderness rather than wine or adrenaline or relaxation or golf or one of the many other facets of this lovely country.

The tour ventured all over New Zealand, from the Far North dive at Poor Knights, to Hobbiton, to whalewatching in Kaikoura, before making it to Queenstown for cocktails.

Read the full report on Ahipara, by Jean-Michel Jefferson.