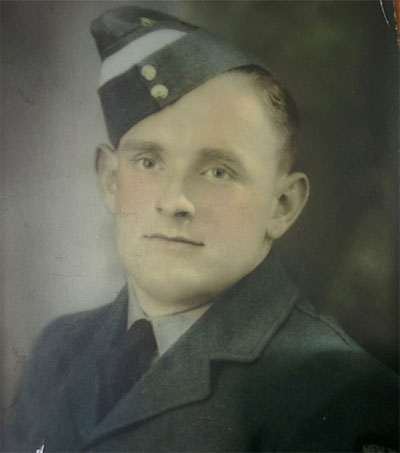 Canadian Gerry Hodge had already received the dreaded telegram once, the one that regretted to inform her that her husband, New Zealander Roy, had been shot down over Europe and was presumed dead, Jack Know writes for the Times Colonist.

Except Flight Sgt. Roy Hodge was fine. He had been rescued by the Belgian resistance, spirited over the Pyrenees, and sent back to Canada to train downy-cheeked newbies at the air force base in Victoria.

Gerry was pregnant with his child now.

So when Gerry got another message in 1944, this one saying Roy’s bomber had disappeared on a training flight from Patricia Bay airport, it was hard to believe.

It was true, though. She never saw her 25-year-old husband again. Daughter Sandy never got to meet her father.

And Sandy’s son George Watson never got to know his New Zealand family – until now, thanks to some sleuthing by one of the volunteers researching the almost-forgotten flyers who died while training at Patricia Bay in British Columbia.

It was Watson’s first contact with the New Zealand side of his family, a thread he thought had been broken forever. “It was surreal,” Watson says.

He credits Brand’s tenacity: “In my head, I call him Peter the pit bull.”

Recently, standing at the Victoria Airport Authority-funded memorial atop Hospital Hill, Brand and Watson talked about how odd it was that two strangers can meet and feel like family. Watson, looking at this grandfather’s name etched into the monument, said he would be back when Lost Airmen of the Empire is dedicated on 1 June.