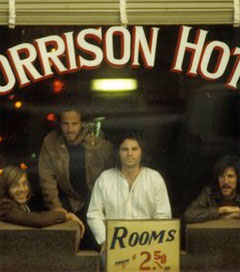 New Zealand-born painter and sculptor Clinton Bopp, who lives in Santa Monica Canyon, has been working on reproducing the Venice Beach mural incorporating Jim Morrison and band members who made up The Doors.

Folk musician turned photographer Henry Diltz’s colour and black-and-white photos of The Doors and the mural became a sensation among rock fans. To this day, Doors devotees from around the world make pilgrimages to the site.

Not long ago, Ralph Ziman, owner of the Brooks Avenue building where pioneering Venice artist Victor Henderson once had his studio, came across one of Diltz’s photos. His wife, artist Maria Greenshields-Ziman, recognised the mural from the remnants on their building. Time, taggers and sea air had taken their toll. The lower 10 feet or so had been painted over to hide graffiti.

Workers sandblasted the wall and primed it. Then, the first weekend in August, Bopp brought his extension ladder and plastic containers of hand-mixed paints to Brooks Avenue, where he worked from early morning till fading light on the mural. He used small brushes to paint in the thin lines separating bricks.

“It’s a great wall and a great location,” Bopp said. But painting bricks onto bricks – and on an angle, to capture the perspective – was quite a challenge. “You don’t have straight lines,” he said, “because of the bumps and grooves.” He has relied on his level, lots of measurements and his eyeball.

Bopp was born and raised in Lower Hutt. He moved to Los Angeles in 1998.