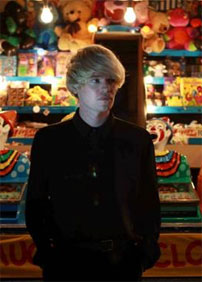 “Twentysomething” New Zealand musician Connan Mockasin is on tour in the United Kingdom playing gigs in Glasgow, Manchester, Sheffield, Bristol and Brighton. The Guardian includes London-based Mockasin in its website’s ‘This week in live music’ column commenting that Mockasin “is psychedelic in the way of Bagpuss or, sometimes, Radiohead — underplayed and rather unsettling.” “To see the whole concept in a song like his [most recent album] Forever Dolphin Love, it might seem impossible to unpick the music from the visuals and replicate it live, but his songs do have a circuitous, bossa-nova flavoured logic to them. All you have to do is tune in, even if keeping up is out of the question.” Connan Mockasin was originally part of a “blues-pop” band in Wellington known as Connan and the Mockasins.