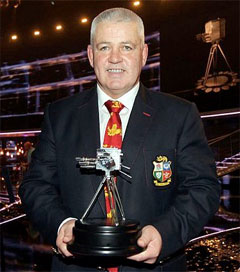 Raise a Glass to the Coach of the Year

Wales and Lions head coach Warren Gatland has been named the BBC Coach of the Year at an awards ceremony in Leeds. The New Zealander “deserves his moment in the sun, as does the sport itself with the Lions at its centre,” according to the Telegraph’s Mick Cleary.

“As befits a former hooker, Gatland has image of a bruiser: flinty, stony-eyed, direct and uncompromising. Those virtues do hold true. But what has become increasingly clear, and which was certainly true across those mad, marvellous six weeks in Australia in June, was that here is a man in touch with his emotions. And not just his own moods and feelings, of those around him as well.

“One of the most telling comments made in the aftermath of that acclaimed victory was Gatland’s assertion that he knew as soon as the final whistle sounded at the end of the second Test in Melbourne that the Lions would win the series in Sydney the following week.

“Gatland is a softie as regards the Lions, a romantic as much as he is a hard-nosed operator. He treasures the ethos even though he himself is a Kiwi. Perhaps he appreciates it all the more as an outsider.

“Gatland helped to seize the day for the Lions, and for that we should all raise a glass.”