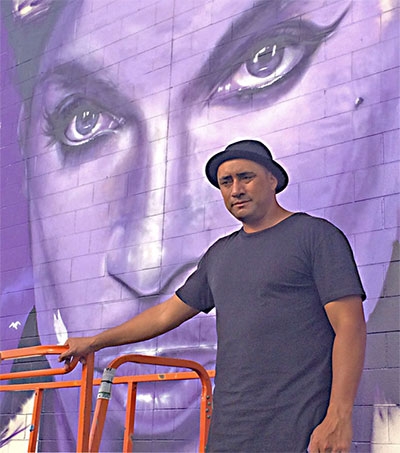 Hoete, who is based in Sydney, is also a musician and an avid Prince fan, and said he had been hoping to create a tribute in Minnesota since shortly after Prince died in April aged 57.

The mural was unveiled by the city’s mayor in front of some 2000 Prince fans.

Hoete has recently painted murals of Prince and Muhammad Ali in Australia.

He said that he received requests to do a tribute mural in Minnesota, which fuelled the desire to come to Chanhassen.

Hoete, originally from Motiti Island in the Bay of Plenty, told the New Zealand Herald that seeing the complete mural and the response it triggered made this latest piece “pretty special”.

“Man, I was brought up on Prince music. My brother and sister are huge fans as well.”

Hoete returns to Oklahoma City to begin a commission after a local business saw his work with a Steven Adams mural he created earlier in June. He will then travel to Louisville, Kentucky to explore the possibility of creating a tribute to Muhammad Ali.