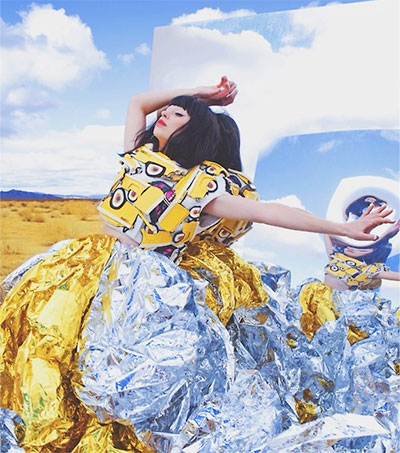 Kimbra only intended to stay in Los Angeles for a month, but after she saw an online listing for an urban farm in Silverlake – “20 chickens, eight sheep, three sheepdogs, an outdoor kitchen where you hang your pots and pans from the trees” – she was persuaded to stick around. “It changed my whole perspective on LA,” she says. “I couldn’t stand the idea of being in a hotel and trying to create out of that space. I needed ground again. I’m from New Zealand, man.”

We meet at Chateau Marmont, an old-school Hollywood hotel on the Sunset Strip. “It’s so noisy at night here, such a scene,” says Kimbra, and she’s dressed for it, in a neon Desert Designs dress, a leopard print scarf and bright pink lipstick. It’s not quite lunch time and the atmosphere in the courtyard is genteel.

Rob Cavallo, the chairman of Warner Brothers Records, told the New York Times that Kimbra “has the potential to be like Prince”. That means there are major label resources behind her new album, The Golden Echo.

She’s reluctant to label her sound, but has previously described it as “prog pop,” which hints at the ambition of the arrangements, the restless production – it’s striking how rarely we hear Kimbra’s naked voice on the album – and the occasional out-there moment. “What I find fascinating is taking something that, to most ears, is quite isolating, and thinking, ‘how can we take this to my fanbase’?” she says.

The Golden Echo is out on 15 August.