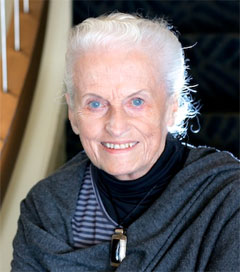 “To label Ann Brebner an instrumental force in Marin’s film and theatre scene is to undermine the breadth of her work,” writes Stephanie Powell for the Pacific Sun, a local newspaper based in Marin County, San Francisco. Brebner was recently named the recipient of the Pacific Sun’s Heroes of Marin Art and Culture Award.

“The four-generational play’s current working title is Shoes,” Powell writes. “As for roles, Brebner’s tried them all. From screenwriting, directing and acting (she was the lead in an adaptation of The Curious Savage) to casting George Lucas’ first two films, discovering Danny Glover and earning a degree in abnormal psychology – there are few creative hats which Brebner hasn’t donned.

“So how is it that a native New Zealander – who studied theatre at the prestigious Old Vic in London – settled in Marin? We have her spontaneity to thank for that – and maybe her intuition, which she credits when deciding how to select the next step in any situation. And, of course, love.

“Ann fell in love at the Old Vic with one of her professors, John Brebner, who had just spent a year studying at Stanford and had fallen in love with Sausalito during his time in the states. In 1952 they moved to Marin. ‘I knew no one in the country at all except for one man to whom I’d been married for a week!’ Brebner recalls.”

Brebner grew up outside of Christchurch. She is the owner of Brebner Agencies Inc./San Francisco Casting and has worked with Woody Allen and Steve McQueen.