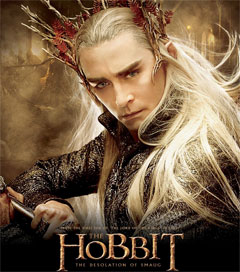 Movie-Making to Rival Lucas and Spielberg

“Peter Jackson has picked up the pace … The Desolation of Smaug is a cheerfully entertaining and exhilarating adventure tale, a supercharged Saturday morning picture: it’s mysterious and strange and yet Jackson also effortlessly conjures up that genial quality that distinguishes The Hobbit from the more solemn Rings stories,” Guardian reviewer Peter Bradshaw writes.

“The absurdity is winning: you’re laughing with, not laughing at. For me, it never sagged once in its mighty two hour 40 minutes running time and the high-frame-rate projection for this film somehow looks richer and denser than it did the last time around.

“Jackson has shown that he is an expert in big-league popular movie-making to rival Lucas and Spielberg. His Smaug, with its fight scenes, chase spectaculars, creepy creatures and secret stone doors opening with a grinding noise, is something to set alongside the Indiana Jones films.

“And all the time, Jackson’s New Zealand landscape has a storybook beauty, a fitting habitat for this story which unfolds in all seasons and times of day: fallen snowflakes gather in beards, the last rays of sunset glints in fur. Jackson depicts this fantasy world with style and gusto, and I’m looking forward to the third film already.”

The Hobbit: Desolation of Smaug opens in New Zealand cinemas on 12 December.