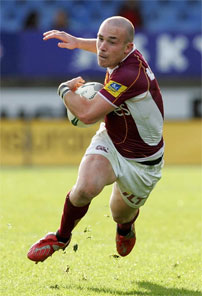 “Like many of his contemporaries, Blair Stewart is a valuable commodity: a New Zealand rugby player,” Tadhg Peavoy writes in a profile of Christchurch-born Stewart, 28, for RTÉ Sports. “Stewart began his career playing for Southland, but had always harboured hopes of playing in a different league on the other side of the globe; France gave him that chance when he moved to play for Albi in 2008. New Zealand and France are worlds apart culturally and Stewart acknowledges the differences of playing egg-ball in the European nation as opposed to his homeland. ‘The French take things a lot more slowly than New Zealanders; there never seems to be a rush in France,’ Steward says. The other stop on most Southern Hemisphere players’ career passports is Britain or Ireland and Stewart would fancy a stint in either. ‘I’m not sure what the future holds for me just yet, this is my last season of my contract with Grenoble so I need to concentrate on playing well and hopefully it will take care of itself.’”