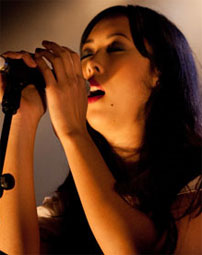 Perkier Versions of the xx

“The Naked And Famous go one better than [US group] MGMT by having a girl in the band — the spectacularly named Alisa Xayalith, whose dreamy yelps combine with the hazy utterings of co-singer Thom Powers to prismatic effect,” the Guardian’s Kitty Empire describes in a review of the band’s concert at Koko in London. “‘Punching in a Dream’ still sounds as fresh as a daisy, just as it did last summer when its release amplified the buzz around the band and earned TNAF a slot on the BBC Sound of 211’s shortlist. Since then, they’ve released their rather nice debut album, Passive Me, Aggressive You; their forthcoming May gig at the 2-capacity Shepherd’s Bush Empire has already sold out, and that can’t just be filled with partisan antipodeans who would normally be at the Walkabout bar next door. Thanks to Xayalith’s intercessions, they can sometimes sound like a perkier version of the xx; like introverts playing hard at extroversion.”

Tags: Guardian (The)  Naked and Famous (The)  Passive Me Aggressive You