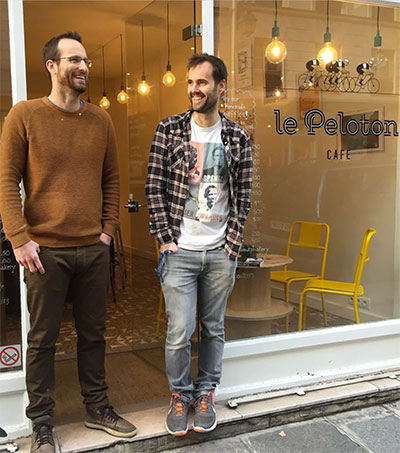 Although Paris is famous for its street-side cafes and artisanal food culture, the city generally serves up an unappetising cup of coffee according to Emma Jacobs reporting for the Washington Post. “So many of our customers over the years [asked], ‘Where can we go for coffee?’,” says Paul Barron (pictured left), a New Zealander who runs a bike tour company here. “And we had a hard time telling them where to go.”

But a movement was afoot. Barron is part of a growing artisanal coffee culture in France, inspired abroad but newly infused with a French flavour and direction.

In 2015, Wellington-born Barron and his American business partner Christian Osborn started their own coffee shop, Le Peloton Café. Some two dozen others have opened within the past five years, many, but not all, in the trendy northeast part of the capital. Americans would call this area “hipster.” The French call it “bobo,” short for “bourgeois and bohemian.” Many are in the same neighbourhoods targeted in the terrorist cafe shootings in November.

Historian and Frenchman whose previous passion was wine, Hippolyte Courty has studied and written about French coffee culture. He says the French, who have been drinking coffee since the 1700s, developed a taste for the bitter flavour of chicory in the early 19th century and later for the harsh-tasting robusta variety of coffee bean imported from the country’s West African colonies.

By the late 20th century, most cafés in the country had contracts with a few large distributors who provided not only the affordable, bitter, lower-quality beans, but also the expensive machines that made espresso, which would otherwise require a significant investment for cafe owners.

So, as a coffee scene has finally emerged in France, it’s not surprising that a lot of the people involved had roots elsewhere.

Original article by Emma Jacobs, The Washington Post, May 4, 2016.