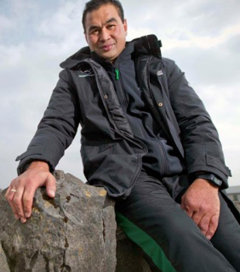 Pat Lam is looking forward to coaching Connaught, one of four Irish teams in rugby’s Heineken Cup, writes Gerry Thornley, in The Irish Times. In Galway for only eight days, Lam told Thornley he was ‘absolutely loving it’ – especially the passion that the locals share for the game he loves so much. ‘We’ve met a lot of people already and it confirms that I’m in the right place. Rugby side? Vibrant city, but vibrant for rugby as well. Kids and adults wearing the jerseys. Exciting, it just confirmed everything about my research,’ Lam told The Irish Times. Pat Lam has moved to Galway with his wife and four of his five children. He hasn’t wasted any time in immersing his family in the local game; one of his sons is already training with the Galwegians under-12s. Lam is in good company in Ireland, being one of four New Zealanders coaching provincial rugby sides. ‘This is also a reflection of New Zealand’s global influence in the game – it’s a process akin to Brazilians trawling all four corners of the football world,’ Thornley writes. Lam starts as Connaught Head Coach on 1 June. He has had a long and highly distinguished rugby playing and coaching career. He coached the Auckland Blues from 2009-12. Lam was capped 34 times for Samoa, playing in three Rugby World Cups. In New Zealand, he played for the Crusaders, Auckland, and North Harbour.