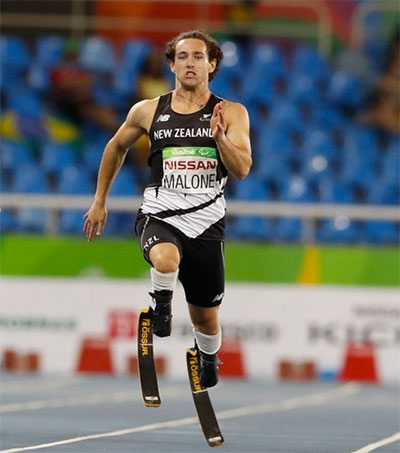 Para-Athlete Liam Malone Vows to Out Do Usain Bolt

Nelson-born double para-athelete champion, Liam Malone, 23, says he will use technology to run faster than Olympic legend Usain Bolt within the next three years.

Jamaican sprinter Bolt, who will retire this summer as an eight-time Olympic gold medallist, set the 100m world record of 9.58 seconds in 2009.

Malone believes technological improvements to the blades used by amputee runners will bring down times.

“In the next three years I’ll run faster than Usain Bolt over 100m,” said Malone, who was born without fibula bones and had his legs amputated below the knee when he was 18 months old.

“It won’t be done in the Paralympics, and I’ve no intention of ever racing Bolt or able-bodied people, it’s about racing against their time outside of the rules and regulations that limit technology. That’s what I’m focused on at the moment.

“If you were me and you were bullied as a kid from five to 15, and you had this opportunity to use technology to do something that hasn’t been done before, you’d absolutely want to do it and that’s what I’m doing.”

Malone was selected as New Zealand’s flag bearer for the 2016 Summer Paralympics closing ceremony. He was appointed a Member of the New Zealand Order of Merit in 2017 for his services to athletics.