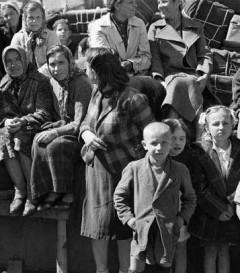 Anne Applebaum is an American journalist and historian. She is a Pulitzer Prize winner for Gulag: A History, a remarkable and eye-opening account of the horrors and madness of the Soviet penal system. Recently, Applebaum was in New Zealand talking about her latest work, Iron Curtain: The Crushing of Eastern Europe. While here, she met three of the 750 Polish orphans who came to New Zealand during WWII. Applebaum was moved by their stories. The Polish orphans’ success in making a new life, in hugely adverse circumstances, also inspired her to think about what it takes to succeed in life. She wrote up the orphans’ remarkable story, and her observations, in a recent Washington Post column. The orphans spoken to were all born in Eastern Poland. After the Soviet invasion in 1939, all were exiled, with their families, to Siberia or central Asia. Many died of illness or starvation. But, in 1942, after the invasion of the Soviet Union, the adult survivors were released to fight Hitler. But, as Applebaum notes, “their children could not fight. Some were already orphans, having lost their parents to hunger or disease. More would lose their parents, or lose track of their parents, in the course of the war”. Then, a remarkable thing happened. An international appeal to care for the orphans was put out. ‘New Zealand – a country that had never before accepted refugees – responded. On Oct. 31, 1944, some 750 orphans and 100 adults landed in Wellington. “Hundreds of New Zealanders met them… cheering and waving flags. More people lined the roads and waved as the Polish orphans drove… to a refugee camp created for them in Pahiatua a village in the southeastern corner of New Zealand’s North Island”, Applebuam writes.  ‘There they stayed together, studied together, organized Polish scouting troops and waited for the war to end so they could go home… But Poland became a Soviet satellite state. Most inhabitants of the Pahiatua camp had nothing, and no one, to return to,” she notes. But “…there was a happy ending – one that we might usefully contemplate. In recent years, the gap in educational attainments of rich and poor Americans has grown wider, largely because of the enormous resources those of us who can do so now pour into our children. Success, we have come to believe, depends on excellent schools, carefully organized leisure and, above all, on high-concentration, high-focus parenting.” But Applebaum reflects, “the orphans of Pahiatua did not have any of these things. On the contrary, they had witnessed the deaths of parents and siblings, experienced terrible deprivation and lost years of education before finding themselves in an alien country on the far side of the world. And yet they learned the language, they assimilated, they became doctors, lawyers, farmers, factory workers, teachers, business owners.” Krystyna Tomaszyk – a Pahiatua child who became a pioneering social worker – told Applebaum that she was proud of their success. “We all had difficult childhoods. But none of us became criminals… we fit in,” she said. “There were reasons for that success. New Zealand boomed after the war… work was easy to find,” Applebaum writes. The Polish children had an unusually warm reception in New Zealand, she notes. But more than 70 years later, the children of Pahiatua have an additional explanation, she says. Zdzislaw Lepionka told Applebaum she believes that “the fact that we were kept together, that we sang Polish songs and did scouting drills together – that was a kind of therapy.” The Polish orphans experiences had Applebaum wondering. “Is an idyllic childhood a prerequisite for a happy life, or are there other roads to contentment?”, she writes. “Are parents the key to future success, or are there other ways to get there? Is a turbulent childhood always a recipe for adult failure, or can some people overcome tragedy? I saw many amazing things in New Zealand – a volcano, a geyser and some extraordinary lush, green landscapes – but none made me think more than that Wellington lunch,” Applebaum concludes.