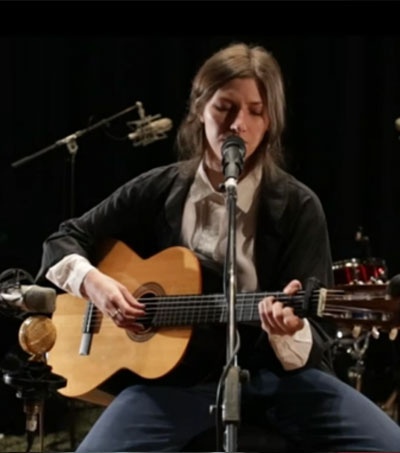 NZ Folk Singer Who’ll Put A Spell On You

“New Zealand’s Aldous Harding –who was recently recommended by Charlotte Church in the Guardian” is “a folk artist whose performances strike that rare balance between fragility and full-blown possession,” writes Kate Hutchinson in an article  for The Guardian.

Hutchinson saw the rising folk star play at London’s Visions festival in August. “The audience were transfixed as she hunched over her guitar protectively, hushing us with her haunted stare, her vocals going through more costume changes than a musical – from Dorothy to Wicked Witch,” she writes.

“I’m focused on my future. I’m ignoring my past, apart from the bits that I draw from to help me focus on my future. I think about how I felt when I wrote the songs and I try to remember that. If I don’t have that, I’m screwed.”

“The past complicates the present for Harding,” as reported in the article. Harding grew up in “Lyttlelton, near Christchurch, and was discovered busking in the streets by NZ artist Anika Moa.” The “bleak eponymous debut that followed” was the “manifestation of what was happening inside my head,” said Harding, “straight up, a nervous breakdown.”

Harding said it’s getting harder for her to revisit the albums themes, as “she’s far happier now.”

“Her new material is no longer filed under the  “gothic fairytale” tagline with which she has become associated but is more inspired by Scott Walker and new love (Harding lives in Lyttelton with her partner Marlon Williams) but also “the desperation to be loved”,” as reported in the article.