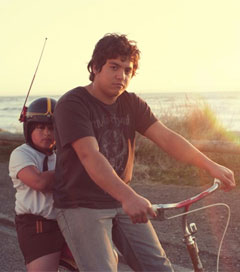 The New Zealand film Shopping, by directors Mark Albiston and Louis Sutherland, has won The Grand Prix of the Generation 14plus for best feature film at the Berlin Film Festival.  ‘An extremely compelling first film with a fantastic lead actor,’ was how the Berlin Film Jury summed up in awarding the prize. ‘We loved watching him [the lead actor] on screen and felt a deep empathy with him.’ The film features ‘sharp editing, strong visual choices and a complex, painful and loving portrayal of family. We appreciated the specificity of the world you brought us into. Your dedication to your vision is palpable,’ the Berlin Jury enthused.  ‘It’s fantastic to have our work recognised at the Berlinale,’ Sutherland said. “It’s such a wonderful festival filled with people who know and love their film.’ Shopping, the pairs’ first feature film, tells the story of Pacific Island brothers Willie and Solomon. It is set in 1980’s New Zealand, a time when many Pacific immigrants experienced acute racism. After an encounter with a thief and his gang of ‘shoppers’, Willie is drawn into the criminal underworld. As the thieves’ hold over him grows, Willie finds himself over his head. His criminal life, and his family life, collides with disastrous consequences.  Shopping also premiered at the Sundance Festival in the United States.