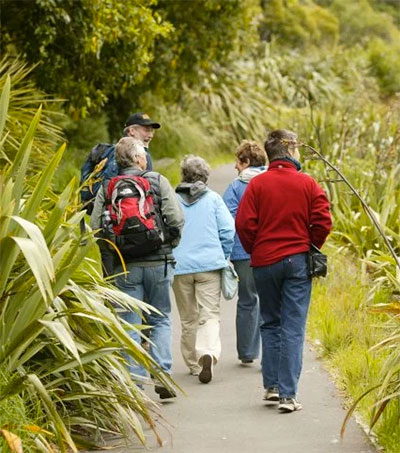 The capital’s Zealandia is recommended in the ‘To Visit’ section.

“A 225ha area encircled by a mesh barrier that keeps out stoats, weasels and more, [Zealandia is] the world’s first fully fenced urban eco-sanctuary,” Ali Wunderman writes for Time. “Since the mesh was erected in 1999, more than 20 species of native wildlife have been reintroduced, including the hihi, one of the country’s rarest birds. In February, Zealandia announced an important milestone: the birth of the sanctuary’s 1000th hihi chick. The species, which was nearly extinct before reintroduction efforts began, is one of Zealandia’s success stories.”

Wunderman also rates Camp Glenorchy, which is named in the ‘To Stay’ section.

“Forty minutes from the adventure hot spot of Queenstown [is] Camp Glenorchy: the country’s first energy net-zero hotel and campground. Camp Glenorchy aims to use 50 per cent less energy and water than similar accommodations by relying on a solar garden and smart lighting; there’s also a smell-free composting toilet in each unit,” Wunderman writes. “The design channels the surrounding valley’s natural beauty through the use of construction materials like recycled timber while still incorporating upscale features like an in-room tablet that enables guests to monitor their energy use.”

Back in Wellington, the magazine’s Joseph Hincks dines at chef Monique Fiso’s new restaurant, Hiakai, which is recommended in the feature’s ‘To Eat & Drink’ list.

“When Fiso returned to New Zealand after seven years in New York City, she hosted a series of pop-ups that paid homage to her Māori roots,” Hincks writes. “She soon found that sourcing ingredients for the pop-ups wasn’t as easy as she’d hoped – local suppliers weren’t used to short-notice requests for vegetables like taewa or titi. But Fiso’s dedication paid off. The buzz her permanent restaurant Hiakai (“hungry” in Māori) created when it opened last year has not only spurred appreciation for native ingredients in New Zealand but also fostered new supply chains for those who want to cook with them.”