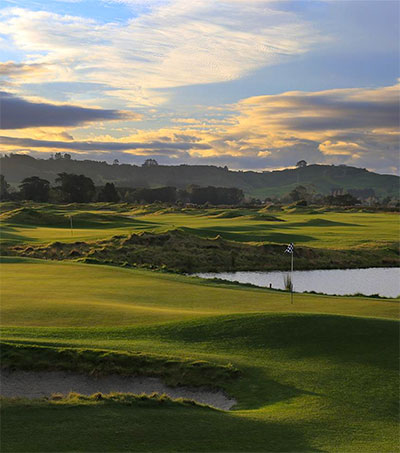 New Zealand’s North Island is one of the most scenic destinations on the planet. And its rolling hills and clifftops have become home to some world-class golf courses. Golf Australia’s Michael Jones heads over the Tasman for a walk on the green.

“Despite its proximity to home, as well as its prominence on my ‘to-do’ list, I had never before paid a visit to New Zealand,” Jones writes. “Happily, however, any of the preconceived notions I once held about the beauty and mystique of the North Island had either been realised or enhanced throughout my journey. The vast, unspoiled landscapes beggar belief. And the charismatic cities and towns are oozing with culture, diversity, and all sorts of entertainment.

“As for the golf, well, New Zealanders are certainly spoiled for choice. In fact, outside of Scotland, New Zealand boasts more golf courses per capita than any other country in the world. The North Island itself lays claim to three of the world’s top-100 courses, including Cape Kidnappers and the uber-exclusive Tara Iti – both designed by renowned architect Tom Doak, who has something of an affinity for the island nation.

“‘No country has seen its golf courses improve more over the past 20 years than New Zealand,’ Doak stated.”

“The country’s largest city is also home to the newly-opened Windross Farm (pictured), which hosted the 2017 New Zealand Women’s Open. Designed by Brett Thomson and New Zealand touring pro, Phil Tataurangi, the former potato, corn and dairy farm was unveiled to the public in 2016.

“To have successfully welcomed the LPGA Tour in just its first year of existence says as much about Windross Farm as anything else ever could.

“Its history as farmland – and as a flat landscape – meant more than 350,000 cubic metres of soil was needed to be brought in to create the layout. Meanwhile, more than $1.3 million was spent on drainage to ensure the course remained playable year-round. It worked. Despite receiving hundreds of millimetres of rain last year, the inland, links-style course stayed open; its wide fescue fairways and colonial bentgrass greens kept perfectly healthy.

“The pick of the holes, for mine, comes during the captivating closing quartet – where, at the 17th tee, the adjacent strawberry farm tempts players to jump the fence for some freshly-made ice-cream. Tackling this tricky tee-shot, which demands a precise approach to a semi-island green, is therefore (usually) made much more enjoyable.”